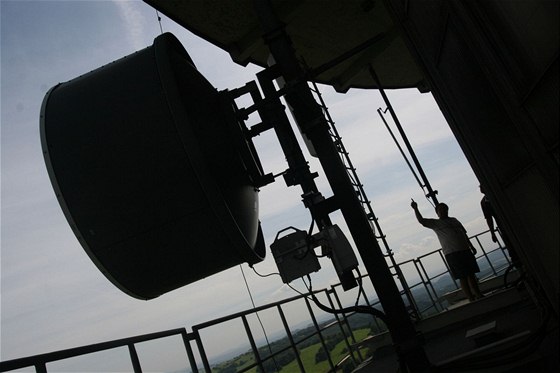 The output of a mysterious radio station in Russia, which has been broadcasting the same monotonous signal almost continuously for 20 years, has suddenly changed.

Numbers stations are shortwave radio stations that broadcast computer-generated voices reading numbers, words, letters or Morse code. Their purpose has never been uncovered, but evidence from spy cases suggests that they're used to broadcast coded information to secret agents.

Over the past week or so, the output of one particular station that broadcasts from near Povarovo, Russia, increased dramatically. The station has a callsign of UVB-76, but is known as "The Buzzer" by its listeners because of the short, monotonous buzz tone that it normally plays 21 to 34 times per minute. It's only deviated from that signal three times previously -- briefly in 1997, 2002 and 2006.

Since then, a number of other distorted voices have appeared over the normal buzzing transmission, as well as knocks and shuffles, as if someone were moving things around inside the broadcasting room. It's believed that the transmission site has an open microphone, which occasionally picks up sounds from technicians working within the broadcast site.

Various fans of the station have begun the process of trying to decode the signal. Interpreting the numbers as co-ordinates gives a location in the middle of the Barents Sea, between Norway and Russia, where there's large scale oil and gas production, and where the Russian army plans to test anti-aircraft missiles in the near future.

Others suspect that it might be a transmission that signals the availability of another system -- like a dead man's switch, possibly even for Russia's Cold War-era Dead Hand fail-deadly system, which was to trigger ICBM launches if a nuclear strike from the United States was detected. Since the fall of the Soviet Union, it may have been repurposed.

The transmissions continue, and are being documented on the Wikipedia page for the station. If you'd like to help, it's possible to listen in yourself, as one fan has rigged up a web stream of the signal. It's currently very busy, however, so if you have difficulty tuning in, then try again later.

What are your theories for what the signal might be?